Holiness, what a word. Lexi and Luke (6 and 4) can never remember the meaning despite several attempts at instruction on this topic. It is somewhat difficult for a young one to understand. Goodness, it is difficult for adults to understand never mind children. So here is the object lesson that finally drove it home………

My 4 year old is really funny but then again, aren’t all moms biased to the humor in their own children? A couple of weeks ago everyone was tired after Sunday school, Lexi was hungry, mom and dad were extended and only Lukie was raring to go. As we exited the children’s wing of the church my “spirited” son began to whine “But mommy, what about worship”…….He continued to fuss and pitch and whine that we were not going to “worship”. Sweet Lexi (understanding that the service would mean that we wouldn’t make it to her beloved Mazzios that day) put her arm around Luke and rightly stated “Lukie, we can worship in the car, on the way to Mazzios……We don’t have to be IN the worship SERVICE”. Of course I am not sure that she was thinking about coming in to an intimate time with her Savior in the car to pizza restaurant all of 2 miles away but she does understand that there are many kinds of worship. As we exited those plate glass doors I looked at Paul and the decision was made- how would we or should we deny our 4 year old worship? In all honesty, Luke loves the music, particularly the drums and he really would prefer to stay in the service for just the music part then slip out. We do this sometimes, and I think it is necessary at times. I have no condemnation on those that stay for one service nor do I believe those that religiously attend both are any better or worse than others. There is however, blessings in corporate worship beyond the fact that we have been commanded to take part in it. There is a discipline, a soothing comfort in the ritual of meeting with a church body for worship.  So yesterday, we headed for the service, sat down front and to the right, like we always do and Lexi’s attitude soured more and more as we got closer to our seats. Luke, on the other hand, was joyful. As we arrived at our seats Lexi continued to frown all the more due to my not having pen or pencil for the children’s bulletin so she could at least “entertain herself”. As we began the musical part of worship each child wanted to be held. At 6 and 4 I wonder when they will stop wanting to be held through music. I don’t mind it though, they will grow up soon enough. Luke enraptured by the drums did his best to sing along in his daddy’s arms, Lexi (after a nudge from mom regarding the need for a heart change) sulked and turned to worship along with us. She can read now, so the ability to sing along is improved. In all honesty, the kids were not trying to misbehave they were just simply tired and I was pushing them at least another hour away from their beloved alfredo pizza that awaited them at Mazzios.

I knew we would have a guest speaker today, our pastor had facebooked it. I am likely the only person that wanted to hear the guest speaker as a result of our pastor’s facebook post! In any case, here we were about to hear from the 82 year old Stuart Briscoe. You can read his bio here:

Of course, I had heard his name however I had not read any of his books. I knew that he was not unknown to our church and that his wife was ministering in the prison about 40 miles from our town. Stuart assumed the stage and began to speak in an old English accent. There is just something about people from England and the way they speak that automatically draws you in. This, and the classic story that we all know of the little girl in Sunday School whose teacher describes a squirrel and asks the class what she is talking about. Of course, the Sunday School answer for everything is “Jesus”. Paul and I have even been known to say “I think it’s a squirrel but I am going to say Jesus” when an answer is obvious. Lexi, on the other hand, had not heard this story. She was able to settle and listen (praise the Lord I didn’t have a pen) and I look to my right and Luke has comfortably laid his head on his father’s chest and the two of them drifted peacefully to sleep. Their sweet little snores bringing snickers to our friends just in front of us. No matter, they had worshiped- Luke in the way that he wanted to, and Lexi was in for a treat.

You can hear his sermon by following this link:

and I urge you to find an hour and listen. Some of what he said will likely not be translated into voice because it was the hand demonstration that left the indelible impression in Lexi’s mind.

What is holiness? Adults will likely rattle off “set apart” and indeed that is what I had been trying to have Lexi remember- We are set apart for God’s purposes. Mr Briscoe used several other phrases and methods of explaining holiness. The one that sank in with Lexi and that she continued to do for the rest of the day was the image of a man who has “cut his finger off”. I guess this is a common thing for grandpa’s to fold down one finger and pretend like it is gone, and to the wonder and amazement of their grandchildren, they can replace said thumb or finger with the slip of the wrist. You all remember that gesture? 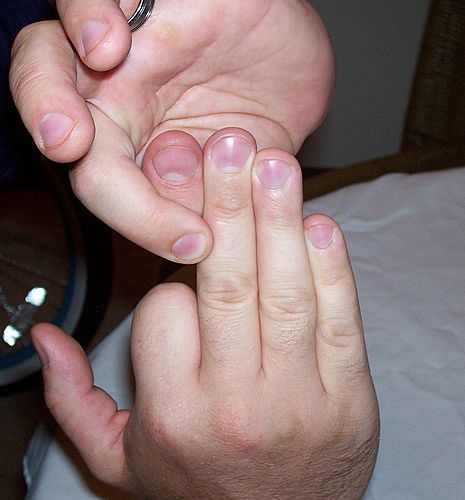 Other than being set apart, holiness actually means “cut off”, the verb to cut, as in the thumb being off the body. The church is “cut off” from the world. Another Stuartism (or Briscoeism) that I really like is that we are “something else”. Those in Christ are “something else” entirely. Of course, none of us are made perfect and we continue to pursue holiness day by day but in stature and countenance we are “cut off” from the world. Later, at aforementioned Mazzios, I asked Lexi (and Luke who had sweetly slept through the whole thing) what it meant to be holy. Putting her hand up and showing her daddy (who had just as sweetly slept as well) how her thumb was missing she said “set apart, cut off”. “What does that mean?” I asked her. With a shoulder shrug she said “I am not sure”. We further discussed this being cut off and set apart. What she can’t understand at 6 I pray will become clearer and clearer to her as she gets older, I pray the seeds of this sermon will bring forth fruit later in life.

I am very thankful for the object lesson in the humor of Stuart. I hope you will take time to enjoy him (with your children) as well.

Here is a link to buy the book:

In conclusion, how did Mr. Briscoe say we are to continue to become holy? Well, ultimately it may just come back to that age old Sunday School answer.

Specifically the passage of

13 Therefore, with minds that are alert and fully sober, set your hope on the grace to be brought to you when Jesus Christ is revealed at his coming. 14 As obedient children, do not conform to the evil desires you had when you lived in ignorance. 15 But just as he who called you is holy, so be holy in all you do; 16 for it is written: “Be holy, because I am holy.”[a]

17 Since you call on a Father who judges each person’s work impartially, live out your time as foreigners here in reverent fear. 18 For you know that it was not with perishable things such as silver or gold that you were redeemed from the empty way of life handed down to you from your ancestors,19 but with the precious blood of Christ, a lamb without blemish or defect. 20 He was chosen before the creation of the world, but was revealed in these last times for your sake. 21 Through him you believe in God, who raised him from the dead and glorified him, and so your faith and hope are in God.

22 Now that you have purified yourselves by obeying the truth so that you have sincere love for each other, love one another deeply, from the heart.[b] 23 For you have been born again, not of perishable seed, but of imperishable, through the living and enduring word of God. 24 For,“All people are like grass,and all their glory is like the flowers of the field;the grass withers and the flowers fall,25 but the word of the Lord endures forever.”[c]

And this is the word that was preached to you.

I will get back to the adoption progress tomorrow, until then……