Who doesn’t love a bouncy ball? We sure do at our home. We almost had a whole party just around bouncy balls but we switched to Hot Wheels just in the nick of time. We couldn’t completely leave out the bouncers that we had purchased (many of them say class of 2012 and they were about 2 dollars for 144 of them!).

The balls made their appearance to the delight of the boys. Of course gleeful little boys and girls rolled in them. Threw them all over the floor and creating a fort out of a small table. (Typical) The kids also like to put their feet in them when they are in their basket and pretend it is a massage. 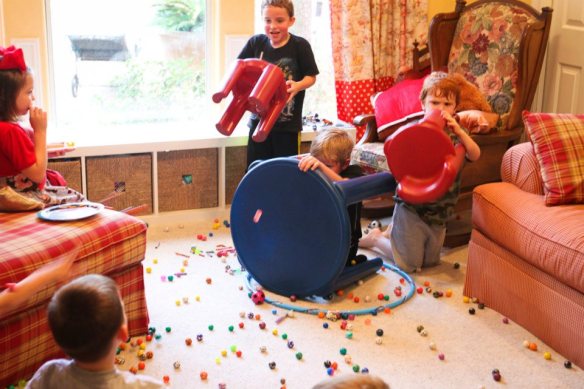 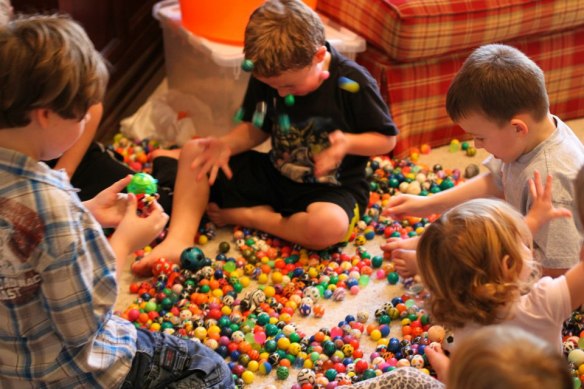 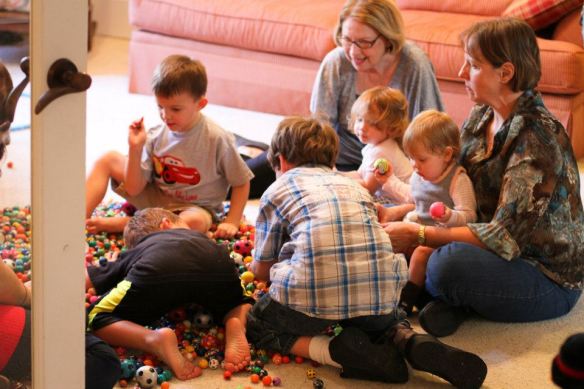 An obscene amount of balls is more than anyone needs. Yes, this would be the American mindset- more is better.

Enter very large ice cream Sundays and over sized….well, just about everything.

Today’s ball reference is due to the behavior of my 4 year old who can be a lot like this video:

Ever tried to stop a bouncy ball or catch one in a small room after it has been thrown with full force? It jumps around bouncing equally off of walls, ceiling, the floor and anything else or anyone else in its way.  Tonight we ask Luke to go brush his teeth and in true bouncy ball fashion he ended up hitting about 5 different things before he made it to the task of brushing his teeth. Do anyone else’s kids do this?

Jumps off the bed

Goes to the piggy bank on top of the dresser

Heads over to the box of books

Heads in to the bathroom to potty (well, at least he did that one right)

Decides he needs to find his blanket

Gets to the sink but is distracted by the different kinds of toothpaste.

Gets the paste on his brush

Oh, don’t forget the HOT WHEELS that he HAS to sleep with

Turn off the light

Find the moon on said ceiling

Ok, so you can call this poor parenting, not having an exact order to every single bed time ritual, or you can call it exhaustion energy (we get that second wind when we are distracted), or just call it stalling. Either way, it’s pretty funny to be honest. On the surface it is funny but underneath there is the need for Luke to obey “Right away, all the way, with a good attitude, Everyday”. That is really our desire but we get lost because he is so stinking entertaining through this little shenanigan. Sometimes after the first tangent or second we will give Luke a gentle reminder of the need to be obedient immediately. Tonight that prod didn’t work so I did the counting thing- now listen, I know the kids need to obey immediately but sometimes we find counting works. I didn’t realize until tonight that may be because Luke sees it as a competition between himself and the time. I said “Luke you are going to get a spank in  3………..2………..1………” I had barely made it to 2 when he had his brush to me with the paste so I could load it up for him. I hand the brush back to him and you know what that stinker said?

“Mommy, count down my swat again for me to brush.”

Really, did he just say that? Really, he just said that! With the gleam in his eye and the biggest broadest smile on his face he wanted to race the clock again. Yes, he has received occasional swats for safety issues and obvious defiance so the threat of it is real. Paul coined the phrase swateez……my son speaks swateez……it motivates him. Maybe because he knows we mean business. Kind of like a bouncy ball that drops into water. It is stopped in its tracks- no more banging off of everything.

I am kind of like Luke from time to time. I want to do everything but THE thing that I need to do. I am just not 4 with a charming personality any more! He certainly is a lot cuter disobeying than I am. Then again, he won’t be 4 forever and no boss is going to motivate him by counting down from 3 to 1, then again…….